Even before one considers the complete Oriel Systems range of hardware and software products, it’s clear that the company – with its manufacturing, research and development facilities in South West England, in addition to two further sites in Manchester and North London – is well-placed to cater for the complete range of telemetry needs.

If there is just one Oriel Systems product that makes this especially evident, it is surely its highly rated low power outstation. Although the firm also specialises in intelligent outstations and video outstations, its low power outstation is in great demand among clients that appreciate its functionality for small solar panel and/or mini-windmill power.

Reliable, confident readings are ensured by an outstation that can generate its own 24 volt supply for ultrasonic sensors – or any other analogue sensor – thanks to the unit having its own internal charge pump. This outstation’s communication is usually over the radio or GSM/GPRS modem to the AWAX master station, with a repeater station generally unnecessary.

Power is also conserved by the Oriel Systems’ low power outstation, with all non-essential devices being turned off and the outstation sleeping until the next time a measurement is required. Despite power consumption of the outstation while asleep being below 1uA, even in this state, it remains capable of recording rainfall data.

The considerable flexibility of the unit’s I/O allows for the incorporation of any desired number of analog and/or digital inputs, while an RS232 or RS485 communications link enables the unit to talk to devices. When communication with the master station is required, all of the unit’s stored values are uploaded from its memory.

This low power outstation is just one of several outstation communication options offered by Oriel Systems for maximum remote monitoring and control functionality. For unlicensed frequencies, one may opt for Low Power Radio Outstation 10mW-750mW complying with MPT1329, subsequently replaced by the ETSI Standard EN 300 220.

By getting in touch with Oriel Systems’ receptive technical team, clients with an interest in realising the full potential of the low power outstation can have an initial discussion on how it can form part of the ideal wider telemetry system for their needs. 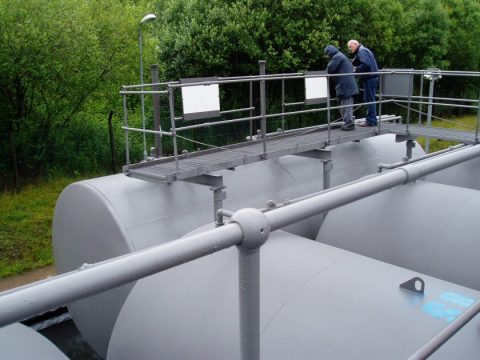 If, in times past, the monitoring of tank levels across the water, printing, chemical and oil and gas industries was an endeavour consuming much time and manpower, it is now possible to bypass many of those issues with a complete telemetry system that is as functional as it is reliable, flexible and cost-effective.

Oriel Systems is one of the premier names in telemetry and tank level monitoring, its reputation built on the customer satisfaction of a large installed user base worldwide. With some 25 years of experience behind it in high technology industrial services, the company knows how to cater for those in particularly specialised industries.

In the case of a water tank level monitor, for example, the customer’s energy tariffs can form the basis of outstation support for different pumping profiles, meaning less money spent on energy usage. Pump control settings can also be changed remotely, removing the need for an expensive site visit.

Oriel Systems also provides a broad choice of sensors for its chemical industry clients, including Radar, Ultrasonic and Guided Microwave sensors and pressure transducers. Also vital to a successful chemical tank level monitor is suitable level sensing equipment, which is supplied, installed and commissioned by Oriel Systems from the major manufacturers. Tank level information can be returned to one central location or hosted, with password protection, on Oriel Systems’ web server.

A tank level monitor also plays an imperative role in the printing industry, where ink is such a costly commodity. This creates a need for ink consumption to be monitored so that production can be planned more effectively, reducing costs in the process. A tank level monitor can keep an ink supplier informed of customer tank levels, with any supplier also preferring to be able to empty a tanker completely and not be forced to return with a partial load.

The printing ink tank level monitor can therefore be set up so that the supplier is alerted if the customer’s tank level falls below a certain pre-defined limit. But irrespective of the client’s exact industry, Oriel Systems is able to advise on and recommend a particular level monitoring system for their requirements, prior to full installation, calibration and maintenance. This final process can include the economical integration of older, possibly outdated legacy systems with the latest equipment.

The need for the most reliable, cost-effective and scalable telemetry systems is as urgent as ever – as market leader Oriel Systems is well-placed to judge. The company does, after all, have a considerable installed user base across the globe, with such names as Celcon, Federal Mogul, AAK, Virgin, Unilever and Roche having all previously availed of its services and expertise.

Organisations across such industries as oil and gas, print, water and chemicals have benefitted from well-tailored solutions from a firm that has spent more than 25 years as a key player in high technology industrial services. In so doing, they have called upon not just in-depth knowhow in hardware including video, intelligent and low power outstations, but also software applications developed by those who have worked in the field since the infancy of Windows.

Nor are these firms exactly alone in giving telemetry an increasing place in their operations, particularly when one notes a recent report suggesting that the global telemetry market will be worth $72.42 billion this year. An anticipated Compounded Annual Growth Rate (CAGR) of 7.31 per cent is set to raise that figure to $103.42 billion by 2019.

The report, entitled Global Telemetry Market by Application & by Geography- Forecast Analysis, was published by US-based global market research and consulting firm MarketsandMarkets, and analyses prospects for the global telemetry market over the next five years. In addition to scrutinising the industry’s drivers, challenges and restraints, the report discusses the market, technology and industry trends of relevance to those offering or requesting telemetry solutions.

The findings of the report included that the global telemetry market is being driven by a continued need for cloud-based services, interoperability and scalability. Europe and the United States is where the primary market players are based, on account of their technical knowhow that is now enabling them to turn their attentions to emerging economies like Brazil, China, Australia, UAE and South Africa. Transition is also taking place within the market towards quicker, more efficient telemetry systems, in which Oriel Systems continues to play its own leading role.

Indeed, for both small and large projects, Oriel Systems remains the first telemetry contact of choice for all manner of prestigious clients, which have previously included such organisations as BP, Chick Master, SunChemical and Oxfordshire County Council. The firm remains of service for new clients seeking the most functional telemetry systems that also make economic sense, in the context of any investments that they may have already made in this area.

Our staff are available to discuss your project by phone during the working day or you can email us 24/7 and we reply ASAP.

Call or fax us:

We use cookies to ensure that we give you the best experience on our website. If you continue to use this site we will assume that you are happy with it.OkPrivacy policy